A few weekends back we went to the Sound Relief concert at the MCG.

After sitting in McDonalds for around half an hour trying to build up the courage to brave the rain, we headed to Melbourne Central and bought some gumboots.

When we arrived we were stoked to find that a massive crowd had still turned up (despite the weather) and the concert was in full swing.

Australia rolled out a massive lineup including Kings of Leon, Jack Johson, Split Enz, Hunters and Collectors and Midnight Oil. We were also lucky enough to catch a glimse of some special guests ranging from Kylie Minogue to Tony Hawk.

In all we had a pretty awesome day. The irony that it had poured down during a Bushfire Relief concert certainly didn’t escape us.

Photos say it all so here’s a peek: 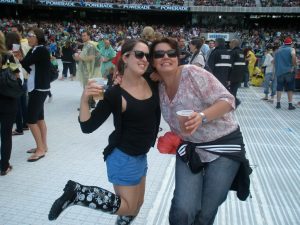